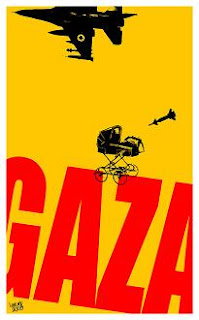 The United Nations proposed 8 Millennium Development Goals, toward which they challenged the world to work. Microsoft's Imagine Cup student competition requires entries to contribute a tech solution that works toward achieving one or more of these goals, at least partially. Numerous charities try to make assisting the neediest in the world an easy part of our daily lives, such as practicing vocabulary or math on the Free Rice website.

Amidst all of this positive development, we still have atrocities committed in what are commonly referred to, passively, as "the most troubled areas of the world." The point is that there is a natural, human right to life and, to a great extent, peace. The current Israeli offensive in Gaza is one of those uses of excessive force that is condemned internationally, and constitutes a tremendous crime against the dignity and natural rights of the people who live there.

The most that most of us can do it raise awareness, to make it known that these actions are not tolerated by the rest of the world, and if enough people are talking about it, the government which we have put in place and empowered for ourselves will take notice and respond in the power it has at the international level.