Thomas M of the Slax project (really the sole maintainer) sent out the following email to a normally very quiet mailing list:

I'm happy to announce that Slax got financial support and I'm now working on a next major update, Slax version 7. There are no IFs or BUTs, I'm working on it almost fulltimeand the plan is to release Slax 7 within the next few months.

That's it, that's the message I wanted to share. The next version of Slax, the version 7, will be a major update. It will be available for both 32bit and 64bit architectures, in 50 languages. Furthermore, I'm considering ARM architecture as well (waiting for myRaspberry IP computer).

There is a huge amount of Linux distributions based on Slax already. I'm sure that the newrelease is going to determine the direction of many other projects in the future. I'll post regular progress updates on my blog www.tomas-m.com and I'll seek there for your comments and your suggestions! So if you are interested, make sure to check that page often.

Please share this on your facebook and other social media, so that every Slax fan can participate in the brainstorming :) Thank you very much!

the author and developer of Slax


So take him up on his offer - visit the blog and chip in! I found Slax incredibly useful for data recovery and backup when a computer was infected with a Windows virus or the boot disk stopped doing its job; the NTFS partition was usually intact and Slax was just enough linux to get the job done without getting in the way - files could be stored on an external hard drive or flash drive, or transferred out over the network.

I hope you will engage in this project if you find it useful and so contribute to the wealth of great tools we have in the open source community. Enjoy!

I think I've mentioned Rackspace before, at least a couple times. Now what they started about two years ago has come to fruition and they now consume their own service. The OpenStack architecture for datacenter infrastructure (abstracted computing resource and abstracted storage resource, both at the object and at the block level plus network management) is now provided in Rackspace's publicly-available infrastructure-as-a-service (IaaS) offering.

The small (256MB RAM) server that was available in their First Generation Cloud Server is no longer available in the Next Gen OpenStack-based offering, and that makes the lowest price point 2.2 cents per hour instead of the 0.5 cents per hour that we had before, but performance is better and provisioning is faster.

Rackspace also claims in another YouTube video that a big part of the Next Gen cloud (as you can see from http://www.rackspace.com/cloud/) is making block-level storage available to consumers, so that we can scale storage independently of compute capability. This is one feature of Amazon Web Services that made me choose AWS over RS for some applications; Elastic Block Storage (EBS) volumes made much more sense than buying a more expensive CloudServer just to have enough disk space but end up with under-utilized processor and memory, and as much as APIs help out, I couldn't afford the development overhead of passing and retrieving user-uploaded files to/from RS CloudFiles.

Anyway, great to see a company standing up against vendor lock-in, inviting multiple players to an open platform that answers the needs of so many application developers and business workflows out there.

I found recently that Scribd, the document hosting service, is incompatible with the Electronic Frontier Foundation's HTTPS Everywhere browser plugin. I was using Firefox (while Google Chrome and Opera successfully uploaded files). I first suspected Flash, and so closed my browsers and reinstalled Flash Player, with no change in behavior. Uploading a document with HTTPS Everywhere enabled failed in the following cases:
HTTPS Everywhere is a plugin that not only uses an SSL connection whenever the web server supports it but also protects against a false sense of security by imposing rigorous standards for checking that the certificate is sufficiently trustworthy, based on the Certificate Authorities that signed it, as well as the particular cryptographic algorithms used, and the versions of SSL software and supported SSL protocols enabled on the remote server. Head over to the EFF website for more information.

Apparently, Scribd's certificates do not stand the test and the solution is to disable HTTPS Everywhere for the Scribd domain, using the toolbar drop-down menu as pictured below: 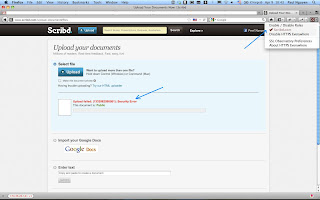 Hope that helps relieve some of your frustration! Happy computing!

The biggest news in Internet policy and legislation these days are the twin Stop Online Piracy Act (SOPA) and Protect IP Act (PIPA), introduced in the House of Representatives and the Senate, respectively. Tomorrow, January 18, 2012, for the 24 hours beginning at midnight EST, the English Wikipedia and many other websites will execute a blackout in protest of this legislation. The blackout was chosen because it is effectively what will result when the government executes the censorship for which these bills provide - entire websites and services will become unavailable.

I will participate in the blackout, and all websites on my pnguyen.net domain will be entirely offline, replaced by a simple statement of my opposition and a link to the Electronic Frontier Foundation's informational page on SOPA and friends.

Catch up on SOPA/PIPA via the EFF or my post from last month.

See you on the other side!

The Legal Battle for the Internet

With recent issues like Net Neutrality (preventing content providers from gaining an unfair advantage over each other via carrier-level agreements) and the debate over the use of unallocated wireless radio frequencies after the switch to digital television, the developments over the last 6 weeks on the Internet front are not surprising. The Stop Online Piracy Act (SOPA) floated to the top of tech and art news, backed by MPAA on intellectual property and licensing grounds, opposed by leading Internet companies at the forefront of information sharing and content delivery.

Claims made by both sides are valid in their motivations, but the bill (H.R. 3261) does not seem to serve either camp well. POPVOX has some good information about what each side says on this particular bill. Also check out some of the news and positions that have developed via the links below: